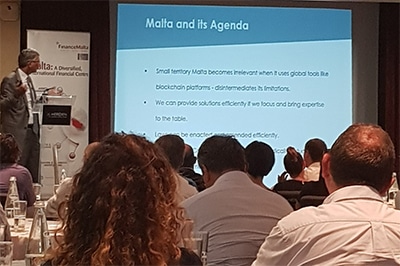 Dr Max Ganado, Senior Partner at GANADO Advocates, participated in a Blockchain-focused seminar hosted by FinanceMalta. This was held at the Le Meridien St Julian’s Hotel & Spa on Tuesday, 29th August and was very well attended by professionals and members from various industries interested in this new digital tool. This seminar was the first one in a series of Blockchain events that FinanceMalta will be hosting to inform and educate the financial services sector about recent industry innovations and developments. It was organised by the Blockchain Malta LinkedIn Group.

The first speaker at the seminar was Mr Silvio Schembri, the Parliamentary Secretary for Financial Services, Digital Economy and Innovation within the Office of the Prime Minister, who confirmed the Government’s full commitment to the introduction of this technology and its support in political terms through legislation which may be needed. The seminar was chaired by Mr Steve Tendon, who is one of the principal promoters of the technology and Malta’s opportunities in this area.

Dr Ganado’s speech revolved around Intellectual Property (IP) and the Blockchain as a case study of how Blockchain could develop to become very relevant in the IP sector. His contribution followed technical presentations on the technology underlying Blockchain and how it works as well as a presentation on high level legal and regulatory challenges this new technology is provoking. 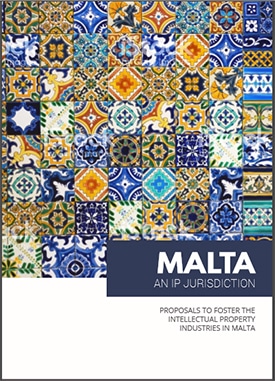 Dr Ganado recounted the events which GANADO Advocates has been involved in over the past few years which brought him naturally into the Blockchain space, demonstrating how fast this technology is developing and how immediate its impacts are. After pointing out the various pieces of legislation he was involved in drafting, such as the Central Registry Act where a digital central register of all registerable assets in Malta was the key focus of the law, he explained the scope of the legislative proposals the firm promoted in a document, “The Intellectual Property Industries in Malta”, in 2013 which at the time was equally focused on the consolidation and rationalisation of the various registers of IP assets such as trade marks, patents and the like. It included recommendations to turn all these into a single centralised digital register for all IP categories and also to create a digital trading platform for such assets. This last project has been overtaken by the emergence of Blockchain technology which can do the job better. Indeed by the time the project was presented to the Government of Malta in 2017, the recommendation stated that “…. one cannot and should not ignore the possibility of introducing a Blockchain solution. This may propel the new Malta system into the future without wasting time, resources and costs on the intermediate stage“.

Dr Ganado then explained how the Blockchain can meet the various elements of the IP project, bringing positive outcomes to the sector as a whole, naturally revolving on one specific type of asset: IP. IP: uses registers; it needs proof of existence and ownership of specific assets; there are many persons involved in its creation, use and dissemination – be they creators, users, licencees, franchisees and so on; IP rights are the subject of legal transactions involving transfers, loans, security and the like; payments relating to IP rights happen all the time; and the creator/owner needs protection of his rights against abuse, appropriation and such things. Blockchain provides a credible solution and facilitation to all these aspects. IP is just a test case and the same applies to all registerable assets such as land, share, ship, aircraft and the like.

This is an area where, through Blockchain, Malta can also benefit way beyond its natural limitations as the Blockchain is not constrained by territory and is global in nature. The human resources and limitations on finance, which are natural to a small island, can also be overcome due to this global quality.

After outlining some of the legal challenges the adoption of this technology will raise, Dr Ganado confirmed GANADO Advocates’ belief in the critical relevance and potential of the Blockchain technology. He announced that the firm has organised a team of lawyers from its different specialisations to focus on the impacts of the Blockchain on these different sectors. The team consists of 12 leaders of different practice areas.

Click here to view a copy of the presentation delivered by Dr Ganado.