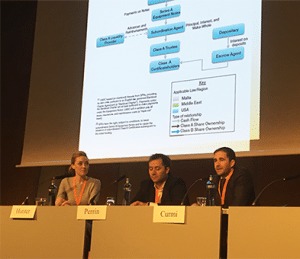 GANADO Advocates sponsored this year’s edition of Global ABS, that took place in Barcelona between the 14th and 16th June. Now in its 20th year running, Global ABS is the annual appointment for investors, issuers and service providers from all over the world to come together, explore and discuss current issues and opportunities emerging within the securitisation industry. This year’s programme featured a look back at the historic developments in ABS, whilst providing an outlook on new innovations and how the market is adapting to positive regulatory developments as renewed confidence in securitisation builds towards capital markets union in Europe.

GANADO Advocates also contributed to the event programme, with Dr Nicholas Curmi from the firm’s Capital Markets team participating in a panel discussion on ‘Innovations in Transportation Finance and Securitisation’ on the 16th June, together with representatives from Norton Rose Fulbright and Fraikin (one of the largest commercial vehicle fleet companies in Europe). The discussion focused on the success of aircraft securitisation (EETC) structures, the application of these structures to maritime assets in the award-winning EMTC transaction, other innovations in transport securitisation and generally what Malta has to offer both in the transport sector and in other asset-classes.

FinanceMalta, also a sponsor of Global ABS 2016, organised an evening networking reception on the 15th June, that provided Global ABS delegates the opportunity to meet with the FinanceMalta team and various local service providers to discuss what Malta has to offer originators, arrangers and investors as Europe’s fastest growing securitisation centre. The networking reception was supported by GANADO Advocates.