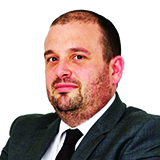 Dr Antoine Cremona is a Partner at GANADO Advocates, regularly representing clients in civil and commercial litigation and arbitration proceedings particularly in corporate disputes with a special focus on shareholder disputes, construction contracts and cross-border proceedings.

Antoine also has significant experience in public procurement and construction law and regularly assists employers, engineers and contractors in the drafting and negotiation of construction contracts modelled on FIDIC and other main industry forms of contract.

He lectures international commercial arbitration at the University of Malta and participates regularly in practice groups relating to dispute resolution and public procurement law.

The increasingly prominent Antoine Cremona represents clients in banking litigation and shareholder disputes, as well as having notable expertise in the enforcement of arbitral awards. An interviewee reports that he stands out for his “strategic vision and decisiveness.” Chambers Europe, 2020